Similarities with the sperm whale
The kogiids have many similarities with their larger cousin the sperm whale, for example the blowhole is places slightly to the left of the head because of the nasal bones being asymmetrical. Also, the lower jaw is smaller and thinner then the upper jaw, and most of their teeth are suited in the lower jaw, and sometimes the teeth in the upper jaw never erupts.

They all have the spermaceti organ in their heads which contains a creamy yellowish-white wax which is used in the kogiids highly developed sound system (known as echolocation). The wax acts by focusing the whale's clicking sounds which echo through the large head.

Characteristics
Little is known about the kogiids as they are not often sighted in the wild. Most information comes from stranded individuals, and a few have survived strandings and been returned to the wild. Even with stranded individuals, genetic confirmation of the species is sometimes required to identify them. The global population and the trend of the kogiids are unknown. But, around the Hawaiian Island, the dwarf sperm whale is the sixth most commonly sighted toothed whale.

Kogiids are thought to be distributed in the deep waters throughout tropical and temperate zones and they may dive to depths up to 300 m where they feed on squid, fish (sometimes sharks) and crustaceans. They travel slowly at the surface, alone or in small groups of 6-10 individuals.

In the lower portion of the intestine, there is a sac filled with reddish-brown liquid and if they are startled they release a cloud of this intestinal fluid. This is called the 'squid tactic', because it is similar to what squids and other cephalopod species do to avoid predators. The liquid creates a cloud that may discourage predators and/or causes a confusing diversion, allowing the whales to escape. A dwarf sperm whale can release as much as 12 liters. There is a very interesting report about this behaviour by Scott and Cordado (1987). A sighting of mother and calf after a purse-seine set was deployed on yellowfin tuna associated with a mixed school of pantropical spotted dolphins and spinner dolphins. The dwarf sperm whales were accidentally encircled. While inside the net, the female released into the water a cloud of reddish material, presumably faeces, 6-8 times during the course of the set. The mother released the faeces whenever a dolphin approached the calf, she then appeared to hide herself and the calf in the middle of the opaque cloud.

Threats and conservation
Fishing
A few have been killed in gillnet fishery in Sri Lanka and perhaps other places. But it is not seen as a big threat to the kogiids. There are reports of by-catch in Brazilian driftnet fishery and in the north-east Atlantic fishery.

Sound pollution
Naval sonar is known to have a negative affect on cetaceans and can cause strandings. How the sonar cause these problems in unclear and still being investigated. Most likely it causes physical trauma, like damage to the ears which are essential for the animals' echolocation system, used for navigation, communication and location of prey. Read more about how this effects beaked whales by clicking HERE.

Ship strikes
Because of their slow surface activity and logging they are vulnerable to ship strikes.

Hunting
This species was sometimes targeted by whalers that was hunting sperm whales during the 19th century but never commercially hunted. They have recently been taken in commercial harpoon and drive fisheries in Indonesia and Japan. It has also been reports of dwarf sperm whales harpooned in St. Vincent (the Lesser Antilles) when they were hunting pilot whales. And the meat has been reported found in fish markets in Sri Lanka. 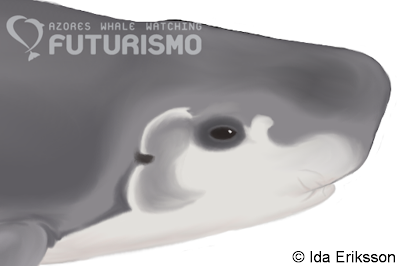