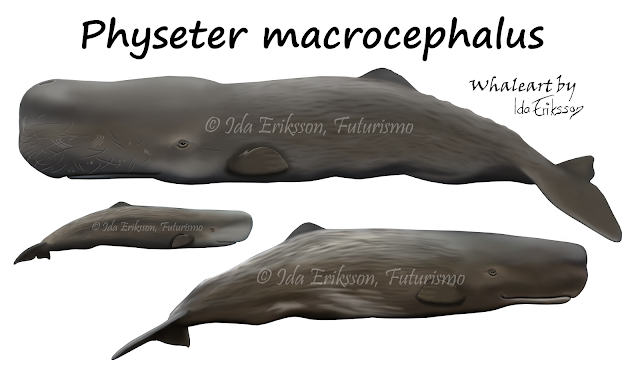 Sperm whales can be seen year round in the Azores, and have become the iconic species in this area. They also inhabit other deep oceans of the world, with the females and calves being restricted to warmer waters and the mature males ranging from the Arctic to the Antarctic.

The sperm whale is also known as the cachalot. The strange name sperm whale comes from the whaling times, when the whalers first examined the contents of the whales' large head they discovered a creamy yellowish-white substance which they thought resembled sperm. This is of course not the case as females also have this substance in their heads. This substance is a wax (called spermaceti) which is used in the sperm whale's highly developed sound system (known as echolocation). The wax acts by focusing the whale's clicking sounds which echo through the large head. Sperm whales communicate with each other with clicks, also known as codas and each clan or family has their own dialect. They also use the clicks for echolocation to locate prey and navigate. They produce the sounds with the phonic lips or monkey lips in the front of the nose. The sound travels back through the spermaceti oil and reflects of the skull and goes out via the "junk" which works as an amplifier and the clicks exit in the front of the nose. The clicks bounce  of the object (rocks, squid, fish ect.) and travels back to the brain via the lower jaw which has an acoustic fatpad and then goes to the ear bones and finally reaches the brain were they process the information. The echolocation is the most powerful bio-sonar system (236 decibels) in the animal kingdom. A sperm whale can detect a squid less then 30 cm long more then a mile away and can be heard as far as 10 km away.

Sperm whales hold a few impressive records: they are the largest of the toothed whales and the largest toothed predators in the world, they have the largest head/nose (1/3 of the body length) and brain (8 kg) in the world. The blow from a sperm whale is easy to identify out on the sea because the blowhole is located in the front of the head and to the left, giving an angled bushy blow. Instead of a well defined dorsal fin they have a low hump and they have short paddle-shaped flippers. Sperm whales are thought to have the longest gestation (up to 18 months) and they are the most sexually dimorphic of all cetaceans (females reach only 2/3 the length and 1/3 the weight of mature males).

In the Azores, the very social family groups of around 12 individuals are seen regularly, especially in the warmer summer months. The groups are made out of females and their young ones, in so called "nursery schools". The calves drink milk in average for 6 year but can be longer, up to 12 years. The males leave the group and form bachelor groups (age between 7 and 27 years old). Older sexually mature males tend to live alone or in small groups.

The only natural predator of the sperm whale is the orca, also known as the killer whale. When a sperm whale group is threatened the females females show a defensive behaviour by creating a ring around the calves, this is called a 'Marguerite', either with their powerful tails or heads capable of ramming facing outwards.
To read more about the sperm whale's closest cousins, the kogiids click HERE.

Sperm whales spend about 90% of their lives below the surface and when starting a deep dive they raise the tail out of the water. A deep dive is also known as a feeding dive, as they go deep in search for prey. They may be the deepest divers in the world (possibly diving to over 3,000 m deep or 10 000 feet) as once a sperm whales as found entangled in submarine cables around 3,000 m deep. Sperm whales feed mostly on various squid species, including the large giant and colossal squids.  Bottom-dwelling fish have been found in the stomach contents of sperm whales. These fish normally live in depths of about 3,200 m.

Squids have sharps beaks, similar to a parrot beak. These beaks are often found in the stomach of sperm whales and they irritate the stomach line. As a reaction to the irritation the whale produces in its intestines a cholesterol derivation which is called ambergris. When removed the ambergris is a thick, black and smelly liquid but later hardens into a waxy aromatic substance. When heated it produces a pleasant earthly aroma. It was used as a fixative in perfumes because it causes the scent to last longer and ambergris was at one time worth more then its weight in gold. Today synthetic substances are used and the trade of ambergris is banned. 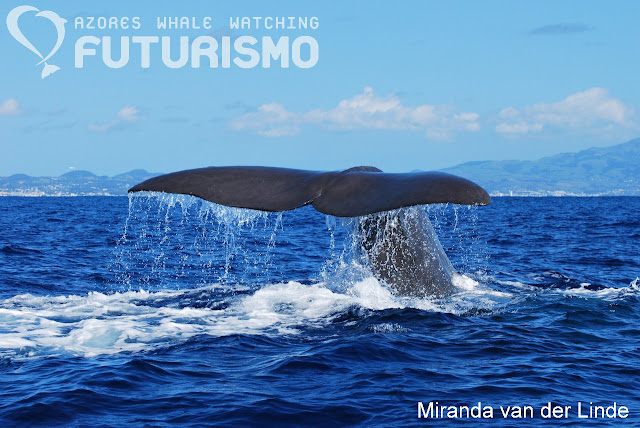 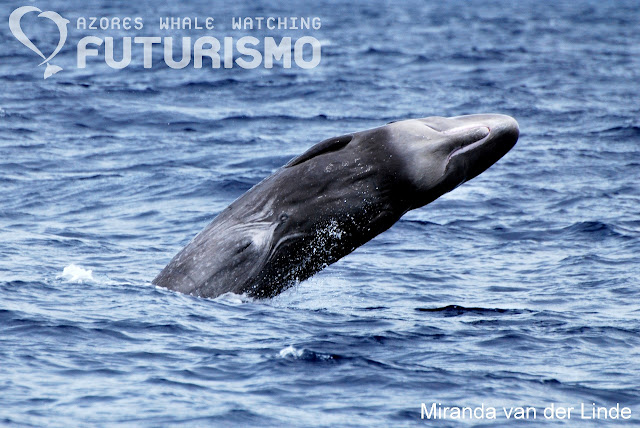 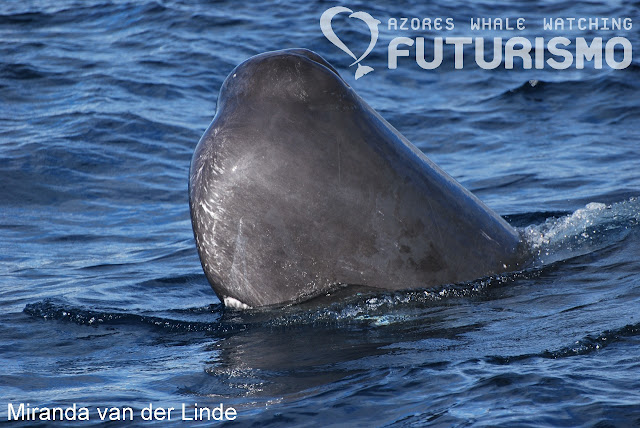 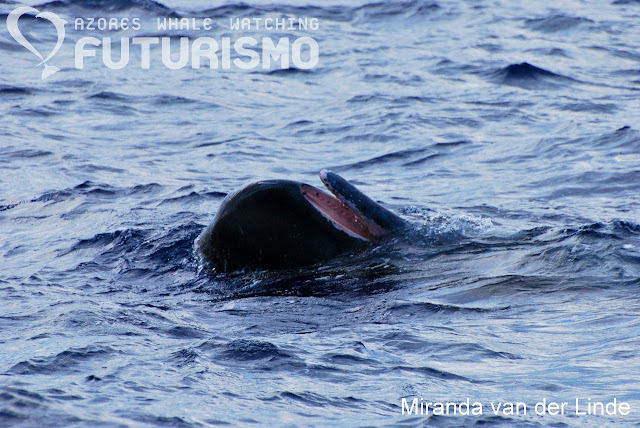 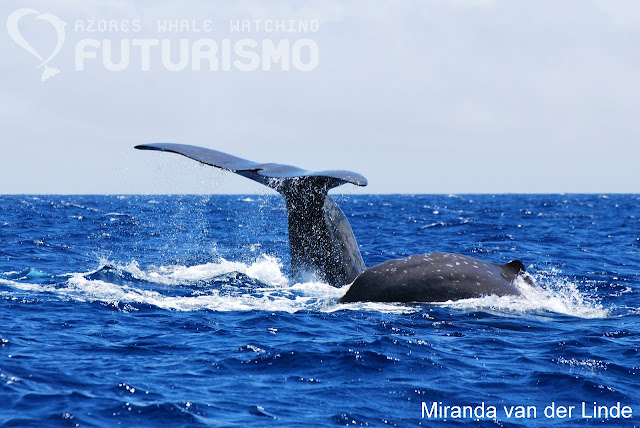 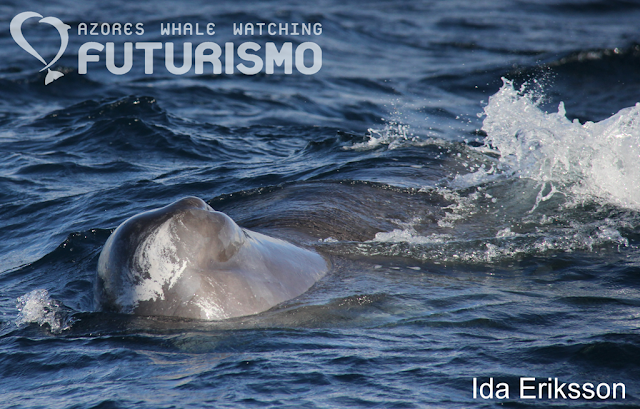 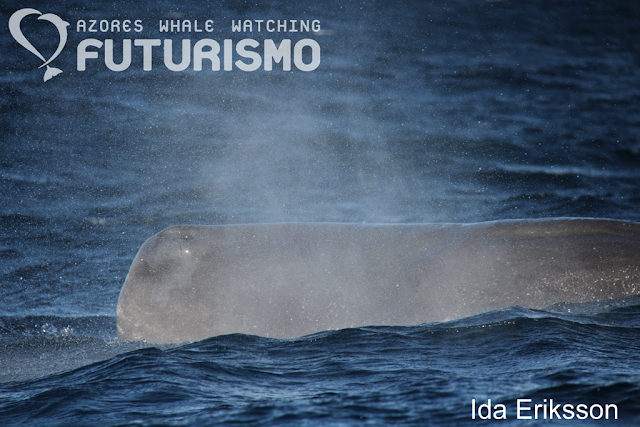 We will be study about whales next week. What a great post! Thank you!