Blue whales and a fin whale in a red-coloured sea

In the last days the weather turned windy again. Our last trip was on Saturday, a sunny day. We did two tours. On the tours we encountered blue whales and dolphins. The second trip just was fantastic with two blue whales going slowly around the boat.

Today in the morning tour we only sighted common dolphins. The visibility didn't allow our vigia (onshore lookout) to see that far so he could not spot the whales further off the coast. In the afternoon the vigia  moved to another sighting station close to the west side of the island. And the result... we got a fin whale in a red sea. The sea was red because it was full of krill. Baleen whales like fin whales and blue whales feed on these tiny shrimp-like animals. So as long as we have this large concentration of krill the whales should stick around a while because they have just spent some months fasting in their winter breeding grounds. We hope that tomorrow we can find the whales again!

Published by: Futurismo No comments:

The amazing blue whales of the Azores

Today Futurismo had two whale watching tours. The weather was foggy and the visibility was poor, giving our vigia (onshore lookout) a difficult job.  But even with these conditions there's no chance in missing the blow from a blue whales because it can reach the 12 m in height. In the morning we were with one blue whale...and of course our friendly dolphins. Risso's dolphins also came along, although pretty shy as they usually are. In the afternoon we saw blue whales again! A presence that we've been getting used to as this year we have a record of blue whale sightings!
Published by: Futurismo No comments:

A real whale of a day: Blue whales and false killer whales

What a whale of a day..today the day was a blast!!! The weather was on our side, giving us a fresh calm wind, with some warm moments of sun that came down through the gaps between the clouds. With this kind of magic sighting, the island was filled with different tones of green and and its colours were enhanced by the slight brightness of the day. 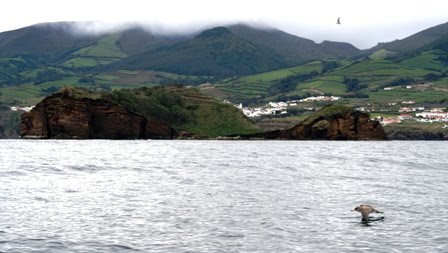 One example of the beautiful colours that were all over the island...isn't it worth visiting?

Even if we hadn't seen any species everyone was already amazed by the beauty of the landscape!
But in Futurismo we never stop wanting to give you more, and so our vigia (onshore lookout) was in position and making his best effort to help us find some animals.

The common dolphins, as usual, gave us their greetings for the day! They are the perfect friends to see when starting the tour because they always put everyone in good mood! 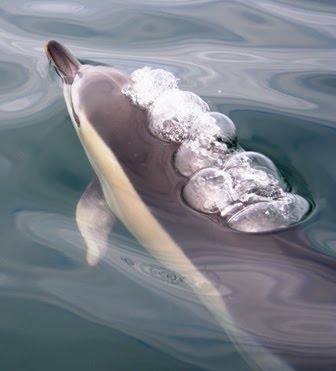 A curious common dolphin coming to the surface to breath. 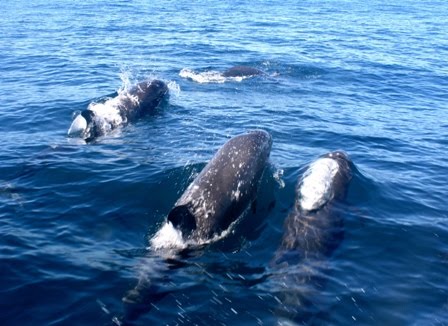 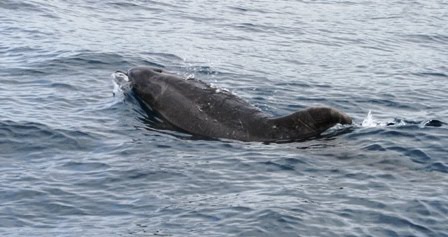 The bottlenose dolphins also were invited and they came along in the afternoon!!

We had fantastic special guests that were with us all day!! The blue whales seem never to go away and that is just perfect for us!! And the show they put up for us!!! Flukes and more flukes!! Today we were very lucky to see this rare behaviour from the blue whale! 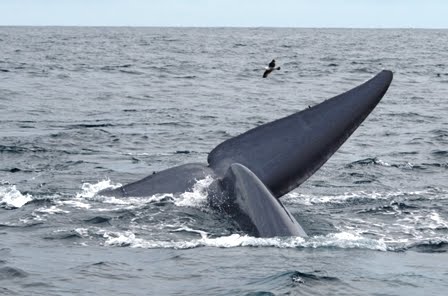 And here you have something that are to see...the tail of a blue whale!!! Everyone was thrilled.
Come and see it for yourself!!
Published by: Sílvia Escarduça No comments:

The last week was very windy and we weren't able to go out to sea. Fortunately yesterday we managed to go out although the air was slightly foggy and fresh and the sea was a bit choppy. While we were out at sea the visibility got worse so that the vigia (onshore lookout) couldn't help us as much as we wanted. He saw a blue whale a little bit far from the coast. We tried to encounter the whale, but when we got to the area the vigia could not see well in our direction because of the light reflecting off the surface of the water. So unfortunately he could not lead us to the whale and it reminded us how important our lookouts are to us for spotting the animals. What we did see on this tour was bottlenose dolphins and common dolphins in the morning and the common dolphins again in the afternoon.

Although the fog was here to stay, today the forecast was much better! And with a little bit of sun throughout the day we were able to find a fin whale, the second biggest animal in the world!! To join the party we also encountered also two of the resident species of dolphins: common dolphins and bottlenose dolphins!!

Lets hope for the winter weather leaves us and the spring to take its place already!! It has been an unusually long winter this year and it seems like the sun has only been visiting us once a week for the past two months! But even with the sad forecasts we've been having, nothing takes our will to enjoy the beauty of this islands and hope that your will doesn't fade as well! Taking the chance of coming to the Azores, it might mean a little bit of rain and wind but also it might mean having the experience of a life time you get to see the natural beauty that these volcanic islands have to offer!!
Published by: Futurismo No comments:

If you are doing whale watching in Azores you must think big! The biggest animal in the world - the blue whale. 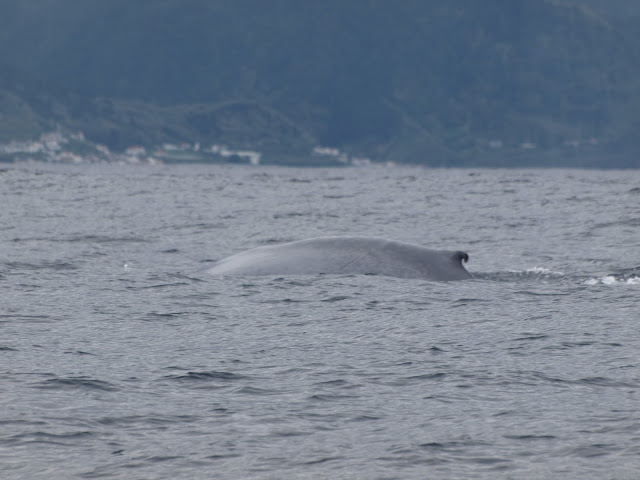 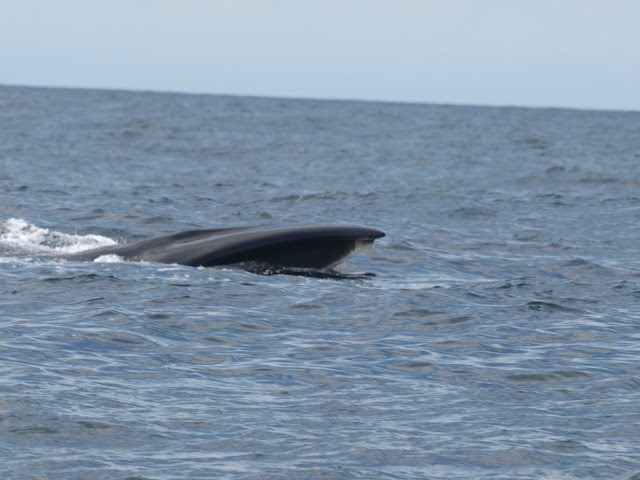 Mouth of a sei whale. Here you can see the white-tipped baleen plates hanging from the upper jaw 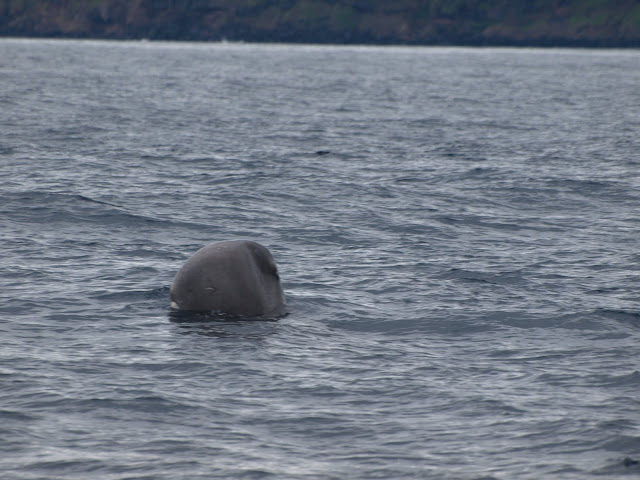 Sperm whale spyhopping, showing the tip of its big head

Five species in one trip! That´s what we got today: blue whale, sei whale, sperm whale, common dolphin and bottlenose dolphin. All in the same area. Amazing!!! During the last few days São Miguel island has been one of the best places in the word to do whale watching. Let the Azorean wildlife surprise you!!!!!
Published by: Futurismo No comments:

Some photos from this week's tours

Here are some photos of the weeks sightings that were already referred to on the 9th of April: two trips with full boats in which we sigthed sei whales, fin whales, a couple of minke whales and also common dolphins and bottlenose dolphins.

Our clients were very happy with the wildlife around São Miguel Island which has a reputation as one of the best places in the world to observe cetaceans (whales and dolphins).

Unfortunately the weather has been changing. Now we are waiting for the windy days to pass as choppy seas can decrease our opportunities to go to the sea. 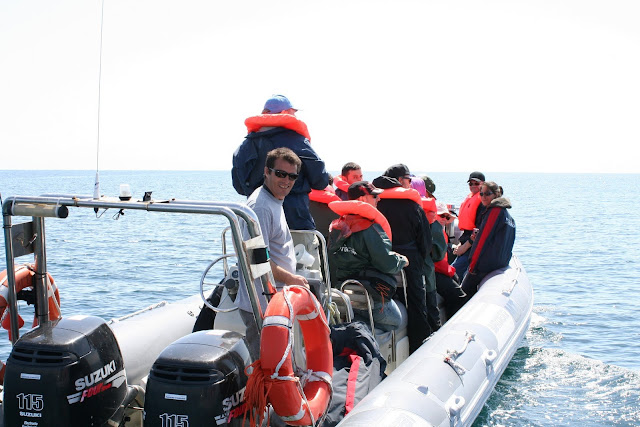 One of our great skippers, Mário and marine biologist Laura (sitting at the front of the boat) 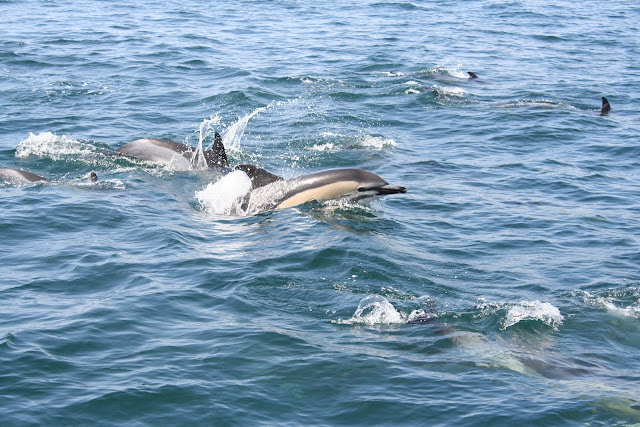 One of the resident species of dolphins, the common dolphins which were having fun as much as we did with their presence!! 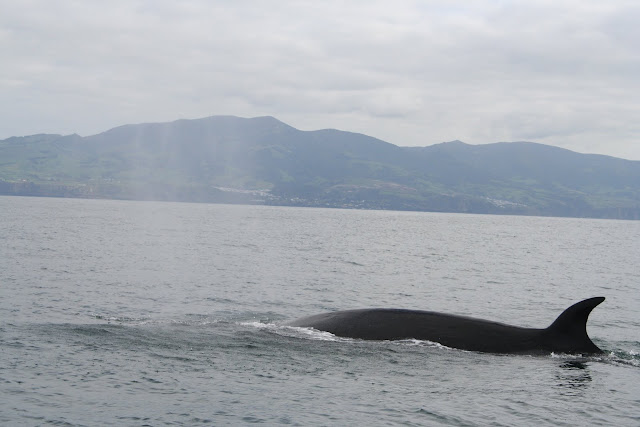 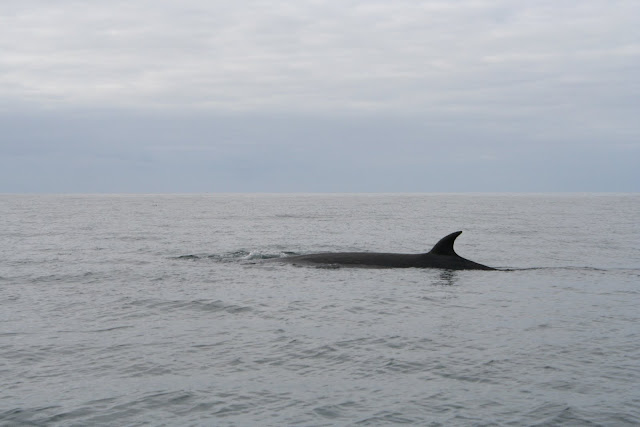 Some photos of the sei whales that have been the most sighted species of whales over the last weeks! 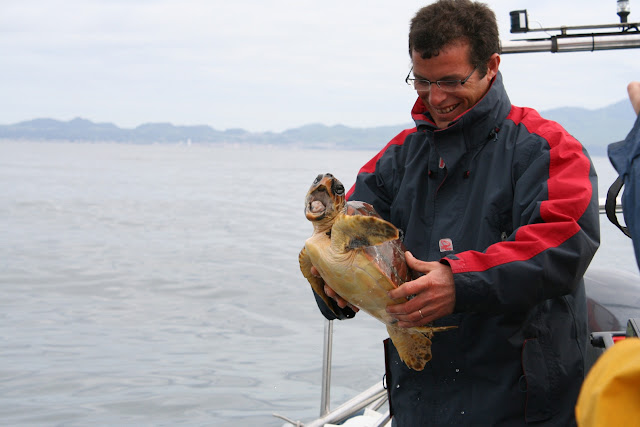 Loggerhead turtle: this species comes along the Gulf stream, mostly the juveniles and after becoming bigger and well fed, they continue their journey along the Macaronesian area (Madeira and Canary islands and also Cabo Verde) and head for the Central American beaches! 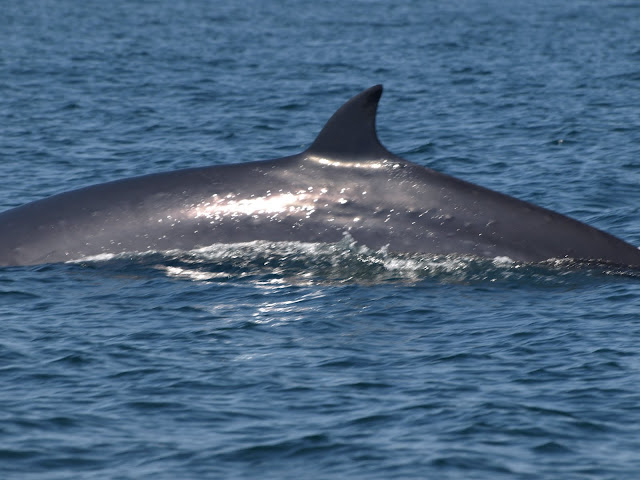 Another Sei whale before its relatively short dive which might be around 5 to 10 minutes long
Published by: Futurismo No comments: 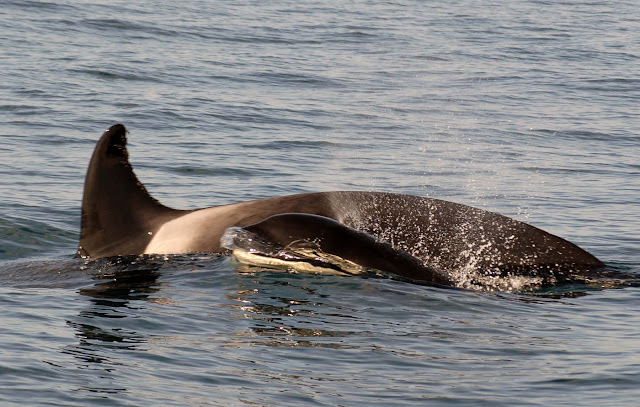 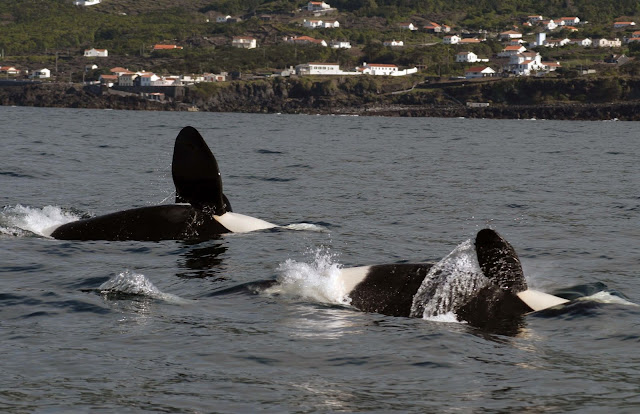 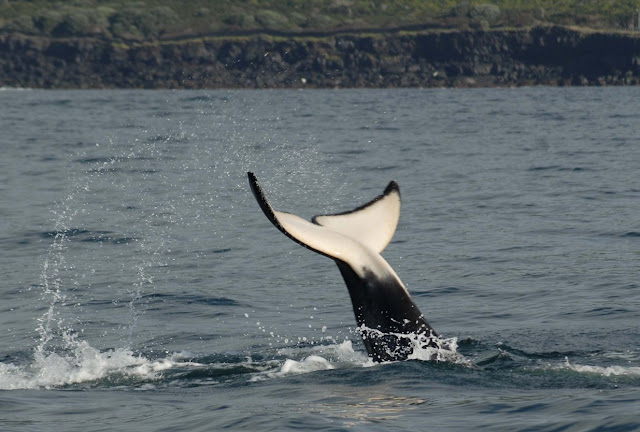 Futurismo was the first whale watching operator to see orcas (also known as killer whales) off Pico island in 2010. This lucky rare encounter took place some days ago. Orcas are not sighted close to the Azores islands very often,so those that were aboard to see it were very lucky. Above are some of the photos taken by Karin from Nova Atlantis Foundation.
Published by: Futurismo No comments:

Fog covered the island on the last three days. Luckily for us today the weather improved in the afternoon and we were able to go out to sea on two successful tours. On the first tour we saw two minke whales (a mother and a calf) and a few dolphins. The fog allowed our lookout to only see three miles away from the coast. During our second tour the weather conditions changed a lot for the better! We had many sei whales, two fin whales and many, many dolphins.

One of our boats was on a swimming with dolphins program and got a curious situation: the sei whales were mixed with the dolphins and it was a  surprise to have bee able to see this kind of interaction. Our two trips demonstrated that the sea around São Miguel island has a lot of food and nutrients and therefore, the baleen whales spend a lot of their migration time around here! We hope to have the same luck in the next few days!!
Published by: Futurismo No comments:

Today was a difficult day for us because the sea was not perfect but many people were anxious to to to whale watching. We took the risk and all got wet, but it was worth it because on both tours we encountered whales. In the morning we encountered sei whales and common dolphins while in the afternoon we were surprised by a blue whale! It was another reminder of how lucky we are to be in this place where we regularly see blue whales, sei whales, fin whales and much more during the spring months.

Published by: Sílvia Escarduça No comments:

Blue whales and sei whales are still present around São Miguel Island. During the spring these baleen whales often make a stop here to feed on the huge "snack-bar" that the Azorean waters provide for them.

Today we had two tours and on both we saw the baleen whales and a few common dolphins. Our clients were surprised with the quantity of whales, in particular the blue whales. We hope to have good weather during the next days so that we can share these emotions with our guests just like we've been doing for the last 20 years.
Published by: Futurismo No comments:

A week of blue whales in São Miguel, Azores

This week we have seen blue whales every day on our whale watching tours in São Miguel Island. The first three days of April confirm our success with the blue whales that pass the Azores every year in the spring during their northbound migration. This week we have also encountered sei whales and fin whales, the other migratory baleen whale species that we see here regularly during the spring months. This is the best time of the year to join us on a tour!
Published by: Futurismo No comments: