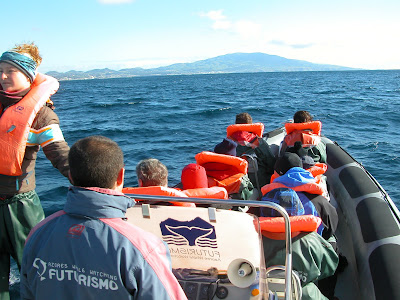 In search of the Sei whale


Whales can be distinguished by the form of their blow. The sperm whale for example has a triangular blow that is angled to the left and frontwards (due to the blowhole being situated on the left side in the top front of the head). All whales with teeth (Odotocete) have one single blowhole, while the baleen whales (Mysticete) instead have two blowholes. In some Mysticetes this makes the blow divide in two parts and this is the case with the Sei whale. The blow of the Humpback whale is also divided in two parts, but here the blow is more heart shaped and also with one loop angled backwards. This together with the dive pattern and the shape of the dorsal fin made our vigia/lookout able to tell us that we were dealing with a Sei whale. Most baleen whales conduct long migrations from warm waters closer to the equator were they have they have their calves and cold waters closer to areas were they feed during summer time, they can therefore pass here on the way and normally we see them most in spring time. Last year we saw Blue whales, Fin whales and Sei whale from March until June (a Brydes whale was then seen in September but as this is a whale that is thought to inhabit warmer waters the whole year around, it belongs to another story.) Baleen whales can however be very tricky to observe, sometimes they follow a straight route and sometimes they swim in circles or rather random patterns, only breaking the surface to breathe once or twice between long dives. This time we were not lucky, because only the skipper caught a glimpse of the animal before it disappeared and was lost. However on occasions like this our sighting guaranty of whales or dolphins, makes it possible for guests to join us on another tour or get the fee back. So let’s try again, now that we now that the big whales are about.

Published by: Jasmine Zereba No comments: 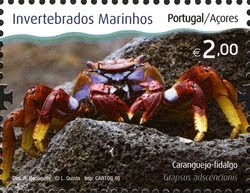 A few days ago we were all set to go whale watching, but as the visibility was not that great and we depend on the vigia/lookout to find the animals, we instead altered the program and went for a cruise at sea.

As we first took off from the harbor of Ponta Delgada we crossed ways with the youths having lessons in sailing, it all looks a bit like mother duck and her ducklings, as one boat guards all the small quick and eager boats that dart back and forth.

We headed off to sea and the waves took us on their back and gave us a gentle push forward. We came across some bird aggregations consisting entirely of gulls (not one Cory's shearwater as they are south at the moment and usually return sometime in February). However among the yellow-legged gulls there were also some smaller gulls flying about.

When we reached the longitude of Ponta Garça we turned towards land and followed the coastline westwards. This way we got a good look at the interesting small weekend houses that lay scattered out in the terrain in the most remote places, making one wonder how anyone ever could reach them. And due to the rain the slopes were made even more beautiful by many small waterfalls.

Going close to the natural reserve of Vila Franca islet we got the opportunity to have a close look at one of its inhabitants, the red rock crab, that showed off its beautiful exoskeleton in black, red and yellow (in picture of a stamp above).

Along the shore and in the small ports we visited we saw Azoreans in the weekend mode, fishing off the cliffs and the dock. This is an activity that involves kids to old people and the small horse mackerel they catch will later be fried and enjoyed with potatoes and a sauce of chili pepper (you should try it, it is good!). Content with the cruise we then returned to harbour and had a good cup of tea.
Published by: Jasmine Zereba No comments: