When is the best time to see whales and dolphins in the Azores?

One of the most common questions we are asked is:
When is the best time to see whales and dolphins in the Azores?

The answer depends on which species you would like to see. In general, the best time of the year to see whales in the Azores is during the Spring time, with April and May being our strongest months. During this time we have many fin whales, blue whales and sei whales passing the Azores on their annual migration. We occasionally also encounter minke whales and humpback whales, although they are not as common as the other 3 baleen whale species. If you want to see our iconic whale species, the sperm whale, you could visit any time of the year, although during the summer months you have a higher chance of seeing them. Similarly, the summer is also the best time to see (and swim with) dolphins, as during this time we have more dolphin species in the area and the groups tend to be larger with many calves present. Futurismo operates all throughout the year, so if you prefer to avoid the busiest times and if you are not a fan of the warm summer weather than you can always visit during the winter months, as we have 4 species (common dolphin, bottlenose dolphin, Risso's dolphin and sperm whale) that are resident to the Azores and hence can be sighted all throughout the year.

The following table is a guide to show roughly which months our most commonly sighted species appear each year in the Azores. There are variations from year to year, for example the season of the baleen whales (mostly fin whales, blue whales and sei whales) can begin earlier or extend into the beginning of the summer months. To see our sighting statistics in more detail click HERE. 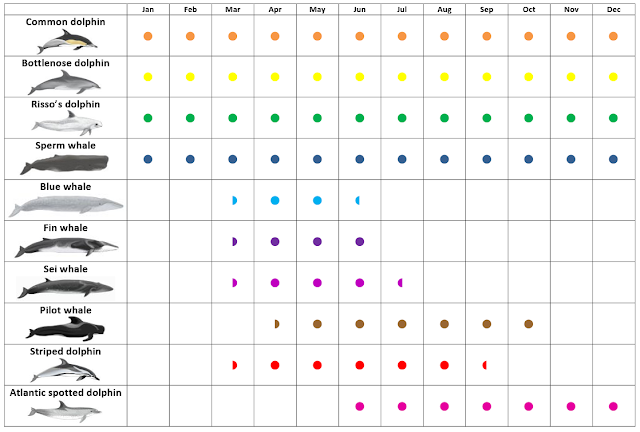 We can see at least 25 different species of whales and dolphins in the Azores, so occasionally we also have more rare encounters with other species such as beaked whales, orcas (also known as killer whales) and false killer whales.
Published by: Miranda van der Linde

are all the whale tours around Sao Miguel in zodiacs? (wouldn't work for me with a bad back) If all zodiacs are there certain view points where I would be more likely to see. On the island May 23 - 31.