Futurismo has been represented at the World Whale Conference in Hervey Bay, Australia! The conference took place between 8-11 October 2019 and was organized by the World Cetacean Alliance (WCA) and Fraser coast Tourism & Events. 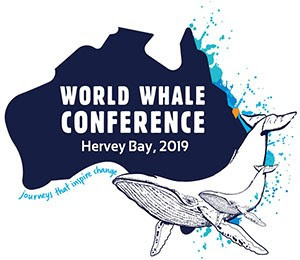 The WCA strives, together with its partners, to keep the cetaceans in their natural habitat and not in captivity, to protect them and their habitats, and run sustainable whale watching activities. The global community of the WCA consists of partners that study, protect, and respect cetaceans in the wild.

We, Futurismo, are members of the WCA, and attended the conference because we believe in responsible whale watching. This conference is very insightful and inspires us to continuously evolve our techniques and approaches during the whale watching trips, whilst respecting the whales and dolphins.

If you have missed our last article about the beginning of the conference, refer to the link here.

During the conference, lectures were given by different stakeholders, which gave us a large variety of lectures to listen to, and they were all very inspirational. This fit very well with the theme of this conference “journeys that inspire change”. Some of the highlights of the conference’s lectures were as follows:

Michael Lück, a Professor at Auckland University, presented a controversial topic that is present in whale watching activities. Akrasia is defined as “A deficient capacity to contain or restrain one’s desire based on the perceived pleasure of an activity overriding better judgement.” So, the example used, that is often found in whale watching, is feeding wildlife. We know that feeding wildlife is harming the animals, but our “guilty pleasure” comes out because we want to see the animals close, so it becomes an ethical dilemma. Do we satisfy our pleasure, even though we know it is wrong? There are many other tourist activities that can be considered controversial and bad for cetaceans, yet tourists buy tickets to do the activity anyway. Why is this? The first reason that Lück came up with was the lack of knowledge. Often tourists are unaware that certain activities are harmful to the animal, and often the tourist only finds out after the activity has been done. So, what can be done to prevent tourists to pay for harmful akratic activities? Awareness needs to be created about the activity, so that the knowledge is there. Then, the knowledge should be spread prior to the activity, to understand consequences of the ticket that they bought and the activity that they are supporting. This way the tourist can fully understand what they are paying for, without regrets after realizing they were supporting a harmful activity.

Swimming with humpback whales in Tonga and in Reunion island.

Swimming with whales has been the centre of attention at this conference and two speakers, Lorenzo Fiori and Ludovic Hoarau, had two separate presentations on a similar topic, both looking at the behavioural responses of mother and calf pairs to the swimming-with-humpback-whale activities. In two different places of the world, both studies showed negative impacts of swimming with humpback whale activities. Imagery during the presentation of Ludovic had shown that the humpback whales displayed agonistic behaviour when the tourists were swimming with the humpback whales. Agonistic behaviour is defined as a social behaviour related to fighting. Lorenzo Fiori for example also showed that the mother humpback whales spent more time resting underneath the surface. But since calves cannot hold their breath for as long as their mom, this resulted in the calf resting at the surface for prolonged periods without the mom. Ludovic has seen similar behaviour in Reunion, and even showed that a female humpback whale was literally moving tourists away with its pectoral fin. Lorenzo showed footage where the calf was showing agonistic behaviour directly to tourists. One of the main problems with swimming with whales in general is that often regulations are not followed, and too many tour-operators in the area of single mother and calf pairs. So, if tourists want to swim with humpback whales, or with any other marine mammal species, it is important to check if the tourist operators are following the regulations, and if they are in an area where they are protected.
One suggestion to improve the activity is to have a set up as the image below.

The lecture by Christina Rose, a representative of the World Animal Protection was focusing on solutions to captivity. She was saying that captivity of marine mammals is not the future activity of these days. She said: “Captivity is no life for any marine mammal and can never fulfil a wildlife animal’s needs”. The animals are sexually manipulated to reproduce, they cannot search for food, travel, travel to the depths, and cannot socialize in captivity. All this is just for human entertainment.
In her talk she mentions that captivity is not necessary for tourists to get close to animals. Particularly in Australia, you can see the animals from the beach. Yet, tourists still decide to buy tickets to see these animals imprisoned in captivity. But if we want to stop captivity, what can we do with the marine mammals that are already in captivity? Releasing them back to the wild is also not possible, although it would be the right thing to do. What happens to the marine mammals in captivity is that they get institutionalized. They get fed, are trained to do tricks, and they become dependent of human care. As they get so used to life in captivity (and many have never seen the real ocean) they cannot survive in the wild straight away. So, this is a part of what the World Animal Protection is working on. They are trying to find a way to transition a way out of captivity. The aim is to make this the last generation of dolphins in captivity. Then, the idea is to transition the current marine mammals in captivity into a wildlife sanctuary, in order to introduce them back into the wild. They are investigating the feasibility of a dolphin sanctuary, because the dolphins will continue to need provisioning, and feasibility is currently unknown. In addition to this, there is a need to educate tourist what are appropriate wildlife encounters, so that people stop going to see the animals in captivity. Lastly, there is a need to equip the industry of captivity, so that they can cooperate.

Akrasia is an interesting concept that not everybody may be aware of. Literally it is defined as "the state of mind in which someone acts against their better judgement through weakness of will". This is important in order to maintain sustainability in whale watching.  Some activities may be unsustainable and harmful towards cetaceans, even though people may secretly like it, such as dolphins in captivity. Cetaceans in captivity is something that Futurismo highly disagrees with, so it is great to see that this point of view is shared at the conference. The swimming with humpback whales can be quite controversial as well, and in certain parts of the world is also considered unsustainable. It is important for us to hear why these activities have become unsustainable, to learn from others in order to do things in the right way: in a respectful way. Therefore, we attend these conferences and enjoy hearing and understanding scientists, locals, guides, citizens and governments’ perspectives; and each perspective is equally important for the entire picture of whale watching activities.